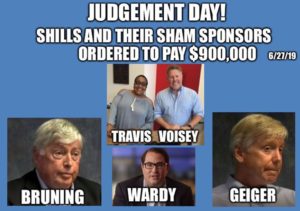 Thursday, June 27, 2019 marked a great day for the truth, justice, democracy and the people of Redondo Beach. The judge in the CenterCal and Westport Capital-funded frivolous and malicious lawsuit filed in name only by shills Chris Voisey and Arnette Travis, granted motions for defense counsel’s legal fees totaling just over $898,000. In other words, the shills and their puppet masters are on the hook for nearly$900,000 in legal fees to the lawyers for the defense.

It was stunning to watch CenterCal’s attorney Bradley Hertz of the Sutton Law Firm scramble in vain to re-litigate the November 2018 court decision and attempt to argue that the defendants Mayor Bill Brand, his Volunteer Treasurer Linda Moffat, Council Member Nils Nehrenheim and ROW President Wayne Craig were not entitled to reimbursement; re-classifying the lawsuit as non-frivolous.   You could see the judge visibly cringe before shooting that argument down after reading the November 2018 decision and judgment again, confirming it was a frivolous lawsuit with Chris Voisey and Arnette Travis as shills for a sham lawsuit.

Other moments were equally astounding as Attorney Bradley Hertz stated falsehood after falsehood about the particulars of the case he lost so miserably in court. Hertz, after the fact, and contrary to his clients testimony on the witness stand, stated he spoke to Voisey and Travis numerous times about the case and who was paying the bills.  The biggest whopper (lie?) was when Hertz denied his $500,000 settlement offer just before the trial last November. Everyone in the court who was there that day was aghast at this brazen display of what we believe the legal term is “total bullshit”.

ROW President Wayne Craig said the following after the court judgement:  “We have always stood by our actions and followed the law.  This was a frivolous and malicious lawsuit from the beginning. Each of us was falsely accused in a thinly-veiled SLAPP lawsuit designed solely to destroy us personally and financially. If the court was appraised of who was actually paying for this lawsuit at the onset (CenterCal and Westport Capital), it would have been immediately thrown out under the Strategic Lawsuit Against Public Participation or SLAPP statute. To defend ourselves we have spent thousands of hours of personal time over the past two years.  Beyond the personal and emotional stress, each of us lost income, dealt with unjust interference with our businesses, were harassed and threatened at workplaces, experienced stress-related health issues, and were personally libeled.  During depositions, the CenterCal CEO unabashedly and implied we stalked his home, stating he filed a complaint with the LA County Sheriff! Frankly I’m shocked that anyone in the community or currently in public office can still think what Voisey, Travis, CenterCal and Westport Capital did wasn’t morally and ethically bankrupt. My heartfelt thanks go out to our legal team of Steve Colin, Jeanne Zimmer and Bobak Nayebdadash for working so diligently these past two years. The three of them, as well as fellow defendants Bill Brand, Linda Moffat, and Nils Nehrehheim will be friends for life.”

The judgement today makes it abundantly clear that CenterCal shills Arnette Travis and Chris Voisey are personally responsible for repayment of our expenses in this frivolous and malicious lawsuit. Not surprisingly, they have already appealed so they have yet to learn any lesson, express remorse or beg forgiveness for their woefully misguided, heinous misdeeds.

Sadly we are not done as CenterCal’s attorney Bradley Hertz, in a multi-pronged malicious attack strategy, is still trying to manipulate the system through his pals in the California Fair Political Practices Commission (FPPC) to prosecute this case even though he has lost in court.  So, in addition to fighting the appeal and being reimbursed for expenses, another Bradley Hertz-manufactured, baseless claim continues. Apparently, Hertz believes he has empirical power to be able to direct the actions of an agency that is supposed to represent the best interests of the people of California. If you think that is wrong feel, like the majority of decent, lawful citizens do, feel free to let them know at the following address:

All this has been a distraction from our work to revitalize our harbor and gather input for the AES site which is currently in escrow.

We need your support to continue moving forward in our efforts on your behalf, and appreciate your donation at the link below.