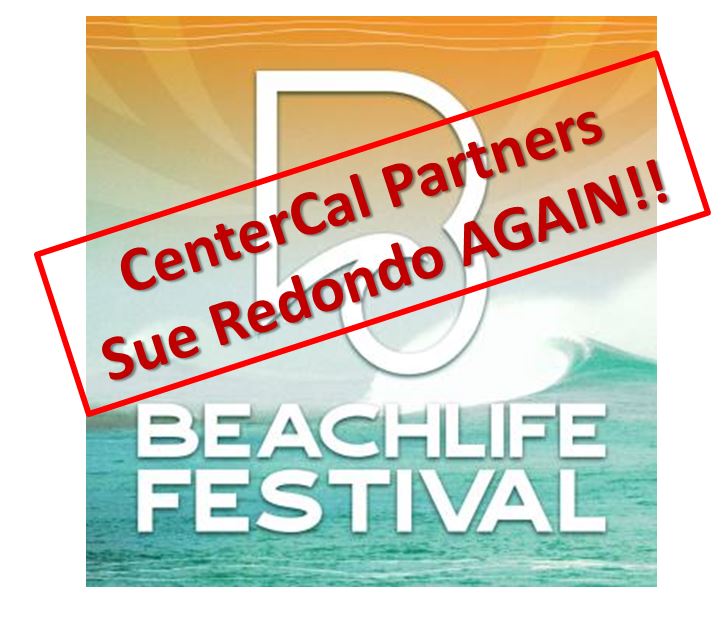 CenterCal SLAPPs Another Lawsuit on Redondo for the BeachLife Festival!

That’s right!  It’s official and disgusting!  The duo serial-litigation team of CenterCal and Westport Capital, aka Redondo Beach Waterfront LLC (“RB WF LLC”), filed a new lawsuit on 4/18/19.  This lawsuit is against Redondo Beach and its residents for allowing the BeachLife Festival.  A copy of the lawsuit is linked here.

Back on March 1st we predicted CenterCal would file suit about BeachLife, over the denials of all the CenterCal cronies, and even Fred Bruning of CenterCal proclaiming they wouldn’t do so.  RB WF LLC principals are Fred Bruning and JP Wardy of CenterCal, along with Greg Geiger of Westport Capital.  Greg Geiger is also the newly-promoted Chairman of the Board at Torrance Memorial Medical Center.  Yes, the Chairman of Torrance Memorial is suing the residents of Redondo Beach so he can build a mall and four-story parking garage on the site of the BeachLife Festival, which is public property that belongs to the residents of Redondo Beach.  Maybe BeachLife fans should call Torrance Memorial at (310) 325-9110 and ask for President and CEO Craig Leach or Senior Vice President Sally Eberhard, and express their disapproval of Greg Geiger’s strong-arm tactics.

The short reason is Bruning and Geiger (RB WF LLC) are pissed the City granted a license for the BeachLife Festival after RB WW LLC was not allowed to build their 525,000 square-foot mall in King Harbor.  Of course, nobody still believes that would have been a good idea, except a few myopic Redondo Beach elected officials and their parochial allies.

RB WF LLC claims they still have “vested rights” as part of their lease agreement (the “ALPIF”).  That agreement was based on an outdated coastal plan, and Redondo Beach Council Members Laura Emdee and Christian Horvath rushed to approve it less than 35 days before the election where voters were going to weigh in on the mall project.  The voters rejected the CenterCal mall in their vote in favor of Measure C 57% to 43%, and the result of Emdee and Horvath’s vote was that Bruning and Geiger claim they had a deal and the right to sue Redondo Beach.

RB WF LLC claims to have rights to build their mall project that goes against state policy and public access rights.  Beyond that, their ALPIF agreement has since been terminated for breach of contract, which is now the basis of another CenterCal-sponsored lawsuit.  We’ve detailed those violations in prior posts.  It appears to many that CenterCal seeks vengeance and the financial ruin of Redondo Beach and the elected officials who opposed their illegal project, and the citizens who helped bring the plan illegalities to the attention of the people and the California Coastal Commission.

We found out about the new lawsuit from our attorneys, as Rescue our Waterfront was asked by the Redondo Beach City Attorney to intervene and support the legal appeal filed by Building a Better Redondo.  This appeal challenges the only portion of a court ruling where RB WF LLC prevailed.  The sticking point with this current ruling is, “Do they even have rights to build something that goes against state policy and coastal access?” This is the reason CenterCal couldn’t get Coastal Commission approval for their proposed mall.

Additionally, CenterCal’s Environmental Impact Report (“EIR”) for the project was so flawed the court ruled they had to stop any alternate project communication with the City until that EIR was fixed and recirculated.  So, RB WF LLC is hanging on a thread with this point.  Since they apparently like to sue Redondo Beach and their perceived enemies every chance they get, our City Attorney seems to be cowering in the corner.  Good thing ROW is not afraid to fight on behalf of the VOTER MAJORITY!  WE are doing the legal defense our City Attorney seems afraid to mount, and this is probably why he asked us to intervene.

One has to ask why WE found out about this lawsuit instead of the City Attorney notifying the Redondo Beach City Council?  We fact-checked: WOW!!!  The City Clerk’s office was served with the notification on 4/22/19, but since then there has been nothing but the sound of crickets from the legal eagles in Redondo Beach City Attorney Mike Webb’s office.  Why didn’t he notify the City Council of this new lawsuit against the City before the BeachLife Festival began?

Rescue our Waterfront isn’t afraid to defeat CenterCal in court, as a win in the vested-rights case could undermine CenterCal’s standing in the $15 million lawsuit against Redondo Beach ONCE AND FOR ALL.  Then Redondo Beach will be able to get back to appropriate revitalization of King Harbor.  This is why we still need your support in our continued efforts towards working for a revitalized King Harbor, and defending our city.

It takes a lot to fight a company with its billion-dollar investor, Westport Capital, which many have reported as willing to attack private citizens with personal lawsuits just to build their mall on your public property, and destroy coastal-dependent uses of your harbor.  It takes even more to protect those citizens working hard to rescue our waterfront from this and any other predatory developers.

Did you love the BeachLife Festival?  Do you want more events like these in our harbor that remains a harbor, not a mall?  Please donate to help ROW continue to defend Redondo’s waterfront, defend your elected officials, defend ROW and its leadership, enforce the law, and defend Redondo Beach.