CenterCal’s CEO Fred Bruning and Vice President Jean Paul Wardy are specifically named responsible parties for the malicious lawsuit filed by Arnette Travis and Chris Voisey, declared numerous times by the court as “Shills for a Sham Lawsuit.”  Excerpts of the official ruling are attached but here are two significant points made by the judge.

Defendants are found to be the prevailing party in this action and Defendants are entitled to recover their costs and attorney fees against Plaintiffs Arnette Travis, Chris Voisey, and the parties who initiated, paid for, and proposed this sham lawsuit including Fred Bruning, Jean Paul Wardy, CenterCal Properties and Redondo Beach Waterfront LLC.”

In naming Redondo Beach Waterfront LLC this judgment includes Co-owner Westport Capital and principal Gregory Geiger who was just promoted as Chairman of The Board of the Medical Center at Torrance Memorial Hospital.

This judgement means the parties who filed the lawsuit, Travis and Voisey, in addition to Bruning, Wardy and Geiger, are responsible for reimbursement of all legal expenses for defendants Mayor Bill Brand, his volunteer campaign treasurer Linda Moffatt, Council Member Nils Nehrenheim and Rescue Our Waterfront (ROW) President Wayne Craig.

ROW President Craig made the following statement: “For nearly 2 years we have defended ourselves against morally corrupt individuals whose only desire was to personally harm and drive us into financial ruin just for exercising our democratic rights. Beyond this baseless lawsuit they and their supporters engaged in a smear campaign to libel and slander us to the community and with our respective businesses. The fact that Voisey and Travis may have committed perjury based on a sworn statement submitted after they testified on the witness stand must be prosecuted. If not what will prevent a similar incident happening to someone else in the future? We are pleased the court saw through this sham lawsuit and we can finally move forward with an appropriate partnership for development of our harbor.”

Yes on Measure C passed in March 2017, despite a $600,000+ campaign funded by CenterCal’s subsidiary Redondo Waterfront LLC for their No on Measure C campaign.  Complicit with CenterCal in this endeavor were residents Arnette Travis and Chris Voisey, who falsely claimed “personal injury” as a result of the election and put their names on a CenterCal-manufactured lawsuit, purposefully designed to emotionally and financial ruin the people they unjustifiably held responsible for their tremendous loss.  Travis and Voisey went so far as to publicly claim THEY were funding the lawsuit.  The court case proved them to be liars in this regard, documented them lying while under oath, documented Redondo Waterfront LLC’s own attorney having to testify WHO funded the lawsuit, and resulted in Travis and Voisey losing their lawsuit, being named “Shills for a Sham Lawsuit” in the official ruling.

In the official judgment, the court has also named CenterCal CEO Fred Bruning and CenterCal Vice President Jean Paul Wardy as responsible parties to the “Sham” lawsuit.  Subsequent to the November 2018 court ruling, Travis and Voisey submitted declarations claiming they knew all along that CenterCal was funding the lawsuit, in direct opposition to their sworn testimony during the court trial where both claimed they had no knowledge of who funded the lawsuit.

The official court ruling released last week outlines what was a despicable, devious, unwarranted, malicious act against innocent citizens who did nothing but help ensure our City and Coastal laws were not allowed to be broken by a greedy developer and complicit City staff and elected officials who ignored basic laws repeatedly pointed out to them. 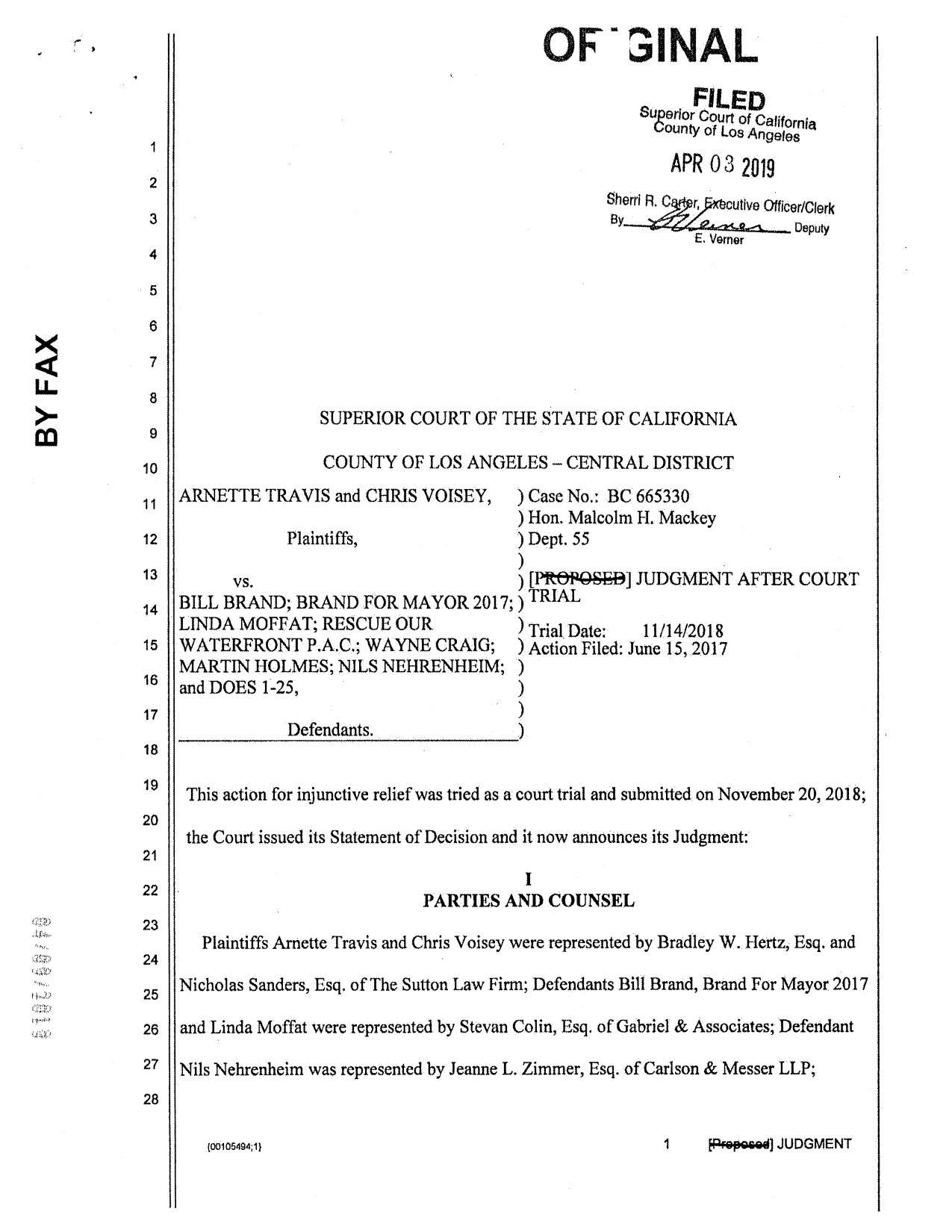 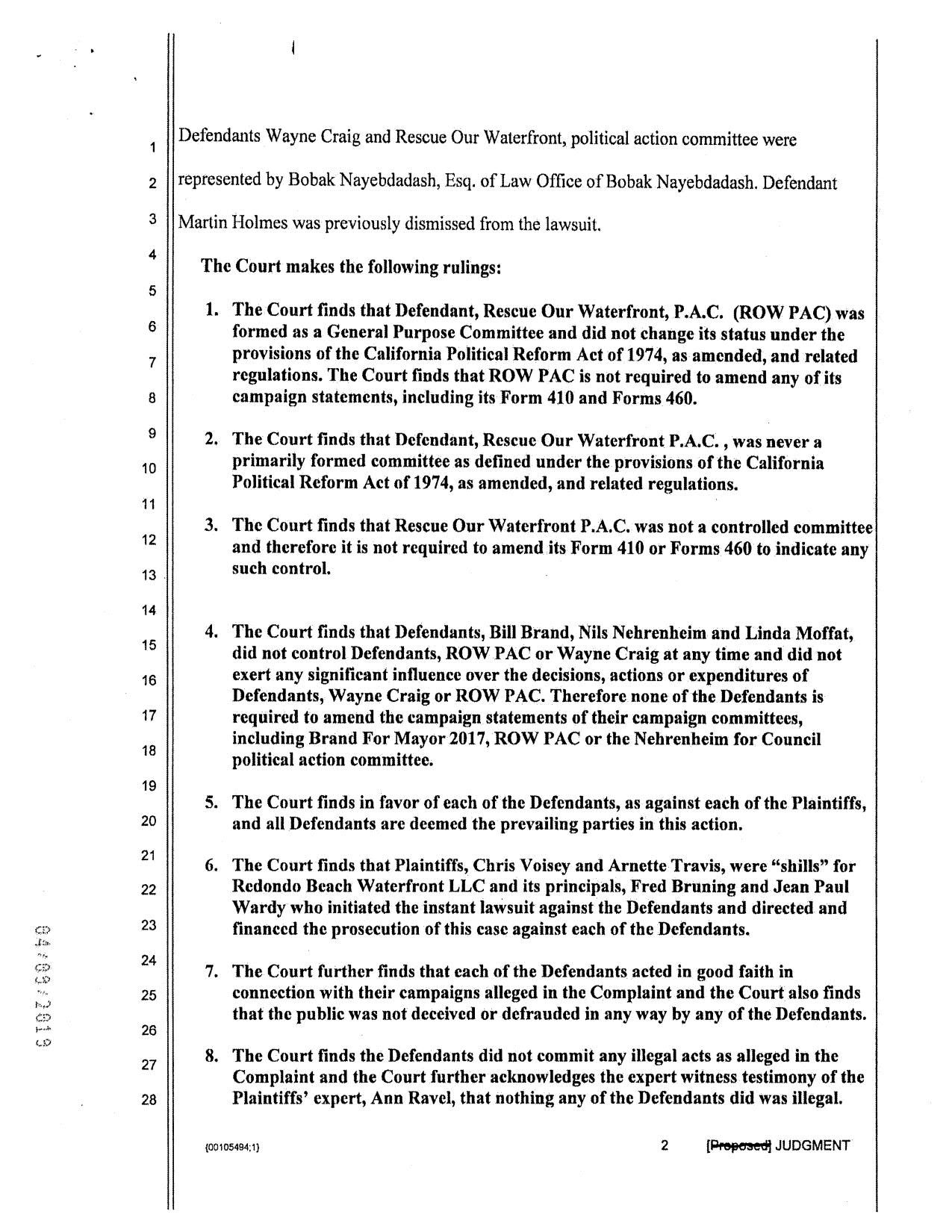 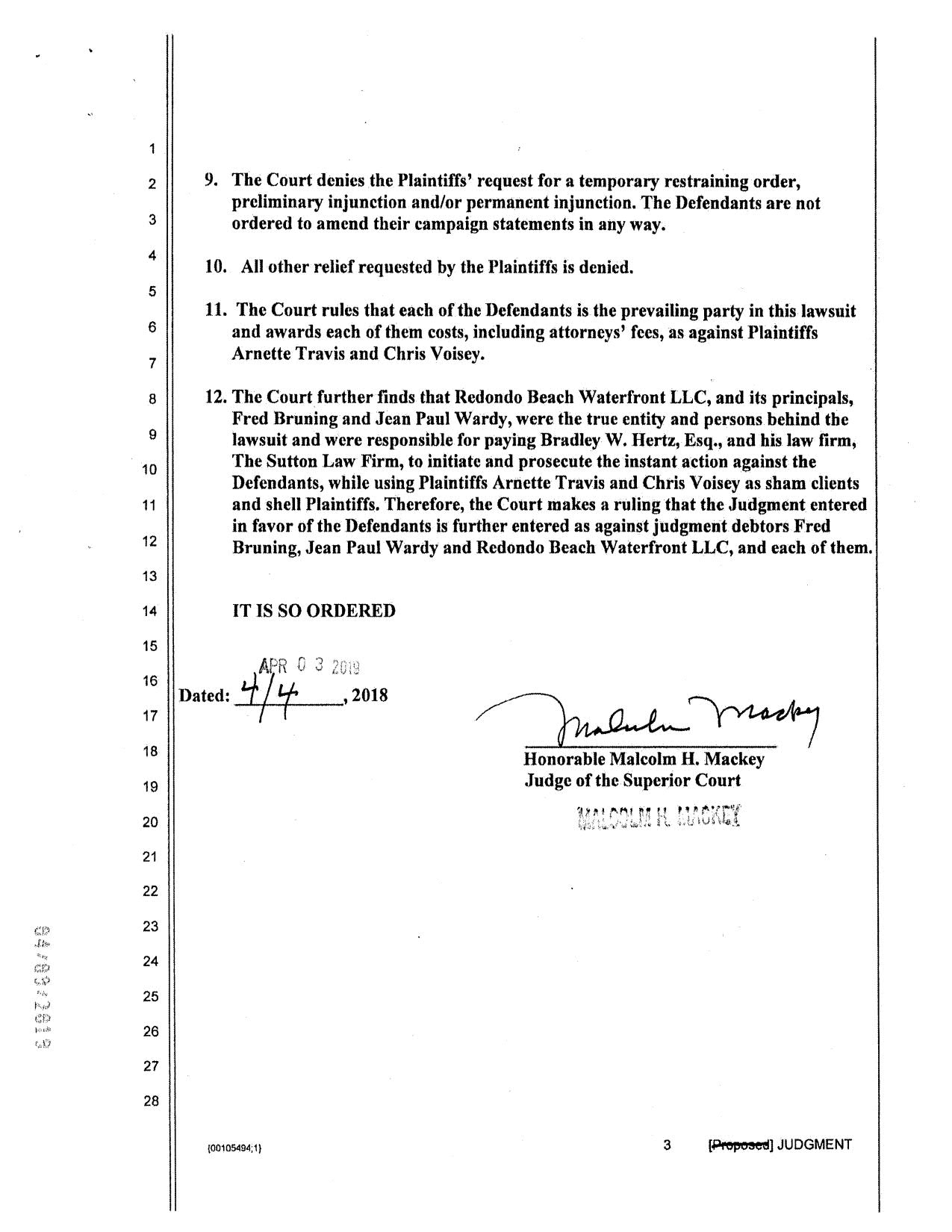