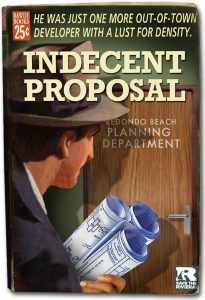 One consistent thread readers will observe through CenterCal supporters’ comments is that they believe building bigger (shopping malls, high-density residential etc.) is somehow “Progress”. To them, taking Redondo Beach to the density and traffic congestion of Santa Monica is just fine, and those who oppose that are “Backwards”, “NIMBYs”, “Hippies” etc. One on the ROW Facebook page suggested that we are somehow “Falling behind” Manhattan Beach and Hermosa Beach.

Let me point out that neither Manhattan Beach nor Hermosa Beach would allow a shopping mall 45 feet tall to be built on their waterfronts, but somehow Redondo Beach will “Fall behind” if we don’t allow that? Also, I have been approached recently by community leaders from both Manhattan Beach and Hermosa Beach who shared their envy of the Redondo Beach community’s current position of taking control of such large and significant waterfront redevelopment opportunities. I was very surprised to be told by a Manhattan Beach elected official, familiar with and supportive of ROW’s work, that he is jealous of all of the exciting things we are doing in Redondo Beach in the years ahead.

It’s up to us as Redondo residents to make sure that our very-much needed redevelopment is done in such a way as to make the city more livable, beautiful, and sustainable, for the long-term, whether it’s the Pier and Harbor, the Power Plant site, the power-line corridors, the Galleria area and Artesia Boulevard, and much more.

We are all familiar with how traffic has been getting worse around Redondo Beach, and the pedestrian safety issues inherent to that, and diminished quality of life it engenders. This traffic is the result of past development decisions by developers driven only to make profits (which is their right), but with no regard to residents’ quality of life, enabled by a compliant city government friendlier to developers than residents, and zoning written and enforced by developers (such as the Planning Commission).

Redondo Beach residents are now drawing the line on overdevelopment. They want Redondo Beach to be more beautiful, livable, and fun, but not more dense and congested – less traffic, not more. Resident groups including Rescue Our Waterfront (ROW), Building a Better Redondo (BBR), South Bay Parkland Conservancy, Save the Riviera and others are enabling Redondo residents to join together and focus their efforts collectively and effectively to make real change in the direction of our town. Join us to make Redondo Beach the city you want it to be!