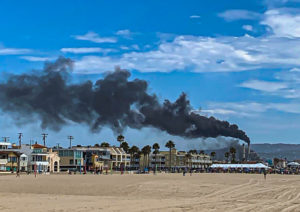 The AES plant during one of two recent “healthy” start ups.

Meet some of our new neighbors who just bought the AES plant!

Now that the deal is closed we know they are pushing hard to keep this 60-year-old environmental hazard and eyesore open for the next several years.  So let’s take a look at who they are so we can get to know them better and try to grasp why our health isn’t a big deal to them.

From the list below you can see it’s a wild mix of LLC’s and companies.  The guy who presented himself as the buyer, Leo Pustilnikov, who offered half of the land to the city at $2M an acre to be used as parkland appears to have ownership of less than 25%. If that’s correct why was he positioning himself as controlling interest in the property?  Who are all the players involved in each of these “ownership shares” besides their named “officers?”  Looks like from some reports of the at the least 12 entities listed so far, the name DROMY might have the majority share, but then again, does anyone really know?

Also what are they going to do with the parcels with so many owners? Are we looking at the same nightmare that the owners of the Galleria tried to pull by subdividing the lots?  Is this a remake of the CenterCal debacle to sell off any portion of the harbor after 75% occupancy without City involvement?  Has our City Council, notably the Council Members from the North part of the City finally learned that they are way out of their league, and need to cease bending over backward for developers who make promises upon which they’ll never deliver?

Finally, what do our elected Redondo Beach City Officials think about this and Assembly Bill 2071 being sponsored by Assembly Member Al Muratsuchi and State Assembly Ben Allen? If passed it would require that the AES plant be closed by the end of 2020. So far Redondo Beach City Mayor Brand, District 1 Council Member Nils Nehrenheim, and District 2 Council Member Todd Loewenstein have supported this effort.

Like we said, more to come, so keep your eyes open.  Make no mistake about it.  There’s far more here than meets the eye and, as always, Rescue Our Waterfront is committed to providing the facts, and the total transparency.

ROW is committed to sharing all of the pertinent facts to keep the residents of our City properly informed.