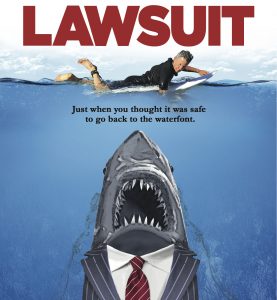 El Segundo’s City Council has narrowed their choices regarding developers to revitalize The Lakes golf course down to two, one of which is CenterCal (Top Golf’s partner – some articles refer to it as the “Topgolf proposal”). If you have not followed Redondo Beach’s recent and ongoing experience with CenterCal, it would be wise to do some Google searches of local articles about the debacle surrounding their now-withdrawn Redondo Beach Waterfront Project.  CenterCal’s disastrous assault on Redondo Beach continues with millions in CenterCal’s unpaid bills, ongoing lawsuits by CenterCal against the city (for $15 million), and personal lawsuits by CenterCal against the Mayor and his volunteer campaign Treasurer, against a City Councilman, and personal lawsuits against a local resident group and its leaders.

Some history: In 2014, Redondo’s then-Mayor and City Council agreed to pursue ideas for revitalizing its Pier and Harbor in partnership with CenterCal, despite the fact that CenterCal has never done a project near the ocean. After 8 public input meetings where consensus between residents and CenterCal had seemed to have been reached, CenterCal unveiled a massive project that did not match their promises to the public. This unveiling was at a scoping meeting (July 2014) that offered no opportunity for public question and answers or input.  The majority of the public who participated in the process was flabbergasted at the bait-and-switch and attempt to stifle public comment and discussion.

Over 200 people submitted their ire in writing, less than 20 wrote in favor, and still the public was ignored.  The project’s obligatory processes were ushered through the City staff departments without proper checks and balances for compliance with City and Coastal Act laws.  Residents were outraged and warned the City they would appeal CenterCal’s massive and inappropriate Waterfront project on every front if the City continued to turn a blind eye and deaf ear to the applicable laws, ordinances, processes, and the California Coastal Act.

CenterCal ignored the residents, who then invested their time, money, and work into educating the public through open information meetings (beginning in 2015), and using public input to craft and qualify an initiative to ensure no future project can ever skirt those laws, as well as strengthening existing language to close loopholes. Hundreds of residents participated in the effort, with thousands of supporters, resulting in their ballot measure (Measure C) prevailing by a wide margin at the polls in March 2017. CenterCal spent more than $600,000 thwart Measure C, versus a mere $24,000 resident-funded campaign supporting the measure.

In 2017, the then-complicit City Council majority (3 for, 2 against) had voted to sign a lease with CenterCal 35 days before that 2017 election, resulting in CenterCal’s $15 million lawsuit when the residents’ initiative passed.

Additional subsequent resident vs. CenterCal wins included the successful appeal of their grossly flawed Environmental Impact Report (“EIR”) that violated the California Environmental Quality Act (“CEQA”), with the judge prohibiting any discussion or movement on the CenterCal project until the EIR was fixed and recirculated.

Almost simultaneously, Redondo resident groups appealed the CenterCal plan submitted to the California Coastal Commission, who upheld the residents’ appeal, agreeing with virtually every point the residents made in a 50+ page blistering report skewering and admonishing the Redondo Beach City Staff for sloppy, incomplete, and misleading work. CenterCal withdrew their project, but incongruously sued the City for not recirculating the EIR for the project no longer in consideration.

Shortly thereafter, (Aug, 2018) the California Coastal Commission voted 8-2 to Certify Measure C (the residents’ initiative passed in the March 2017 election) as the law, with the motioning Commissioner citing there was nothing in Measure C that violated the Coastal Act, contrary to assertions by CenterCal.

CenterCal didn’t listen to the public, didn’t comply with the laws or the Coastal Act, lost in Court, lost with the California Coastal Commission, and refuses to accept any of those decisions. CenterCal attempted to corrupt the electoral process in Redondo Beach through laundered campaign contributions. Through ongoing litigation, CenterCal is holding up any revitalization progress at Redondo’s waterfront with another partner. CenterCal is not a partner for your city; it is a bully vexatious litigant that has dragged down Redondo’s former Mayor and other officials, and has left behind a mess of unpaid bills in the millions, lawsuits and recrimination.

CenterCal also rewarded its supporting Redondo elected officials with money, tens of thousands of dollars, some laundered through an unrelated civic-employee labor political action committee.  El Segundo residents would do well to inquire as to which of their elected officials have already accepted money from CenterCal/Top Golf.  Here is how to do it:

Public record requests of donations to candidates (say from CenterCal or Top Golf) can be made via email to the El Segundo City Clerk. They should be listed in each FPPC Form 460 filed by each elected official.  You should request copies of each elected official’s FPPC Form 460s that have been filed, back to at least 2010 (we understand CenterCal began to receive special treatment and city staff attention shortly after 2010).  You should see contributions on the forms.  CenterCal is adept at laundering the contributions through other organizations, so be alert to that possibility – set your skepticism and B.S. detectors to 11.  The most recent Form 460 filing period ended on 6/30/18.

Here are the elected officials to check: