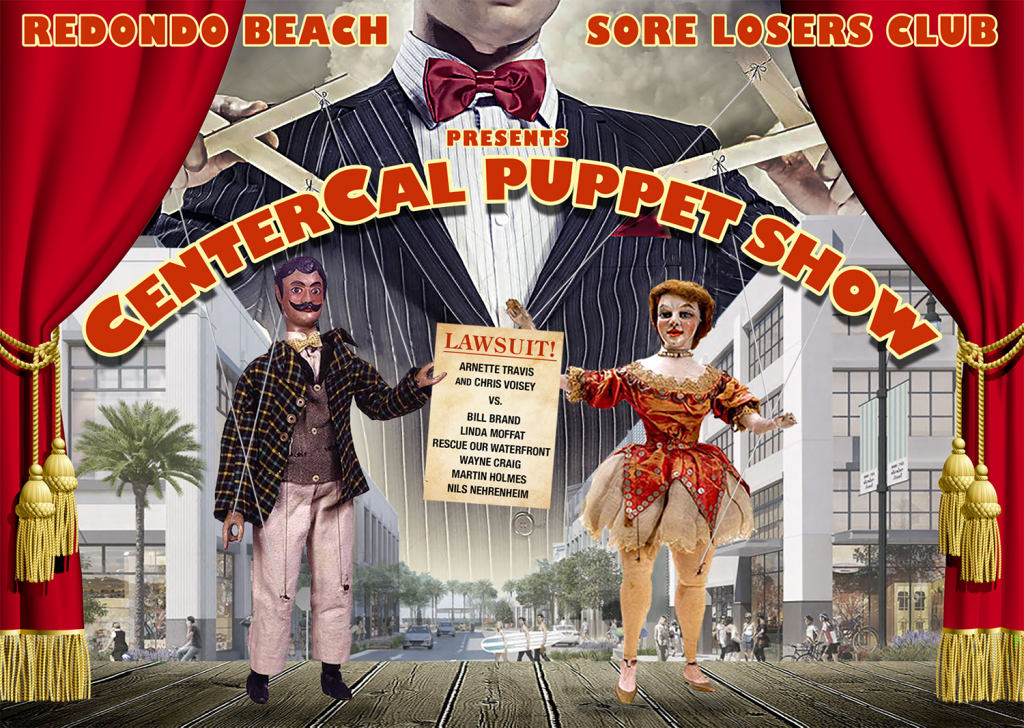 A strategic lawsuit against public participation (SLAPP) is a lawsuit that is intended to censor, intimidate, and silence critics by burdening them with the cost of a legal defense until they abandon their criticism or opposition.  Such lawsuits have been made illegal in many jurisdictions on the grounds that they impede freedom of speech.

Unfortunately for Redondo Beach, anti-SLAPP statutes in California have been weakened by the state legislature, such that it is expensive and difficult to use for defense and to prosecute.  Also, businesses wishing to silence critics and whistle-blowers can recruit unwitting persons, third parties uninvolved with no obvious connection to the business, to be the named plaintiff in a SLAPP suit – these are referred to as “Proxies” (also “Puppets”, “Minions”, “Stooges”, “Lackeys”, “Flunkies”, “Pawns” etc.)

Using lackeys as plaintiffs leaves the innocent defendant with the nearly impossible task of proving the suing business is paying for the lawyers and other legal expenses.  The lackey simply declines to respond under oath to the question of who is paying their legal bills, claiming “Attorney-Client Privilege”.

As you know, a resident group “Rescue Our Waterfront” (“ROW”) opposed the huge private shopping mall project that was planned to be built on public property next to the Redondo Pier and King Harbor with a 99-year lease.  ROW is a group of ordinary residents concerned about the size, traffic and other negative impacts of allowing this mall’s construction, and they organized a successful effort to challenge the project.

The only reason for these lawsuits is to try to discourage Redondo Beach residents from being active in their opposition to CenterCal and Westport Capital’s mall project on public property that belongs to the residents.  The message is, if you speak up against CenterCal and Westport Capital’s mall project, you will be sued by them.

Meanwhile, right now, Wayne Craig, Bill Brand, Linda Moffat, Nils Nehrenheim and Rescue Our Waterfront are personally incurring tens of thousands of dollars in legal expenses to defend themselves and their right to speak out in opposition to the building of this giant mall on public property.  They are also defending the right of all residents to weigh in vocally and actively on critical issues impacting the whole city, matters involving public property, and community decisions impacting everyone’s quality of life.

The answer to these SLAPP suits is for you, as a member of the Redondo Beach community, to fight back by contributing to the legal defense fund, and demanding that CenterCal and Westport Capital cease from harassing Redondo Beach and its residents.  Redondo Beach belongs to you, it’s where you live – it does not belong to mall developers.

Here is an article from the Easy Reader published the week of August 4, 2018 regarding the lawsuits: